Heidrun Wirth was born in Vorarlberg, Austria. She got her first bassoon lessons at the age of eleven at the music school Bregenzerwald. In 1999 she got admitted in the class of Prof. Allen Smith at the Landeskonservatorium Vorarlberg. From 2004 to 2011 she studied with Prof. Richard Galler at the Universität für Musik und darstellende Kunst in Vienna, where she graduated with honors and received the award for outstanding achievement. From 2007 to 2009 she was a student member and later a regular member of the Philharmonic Orchestra of Munich. Since 2010 she is bassoon solo at the Berner Symphonieorchester.

She took part in master classes with Klaus Thunemann, Dag Jensen, Lyndon Watts, Milan Turkovic and Sergio Azzolini. Several times she won the competition Prima la Musica. In autumn 2003 she ws awarded in the European competition EMCY and performed then as a soloist with the Bruckner orchestra and Dennis Russell Davies as conductor in Linz. In 2004 she won the great prize Gradus at Parnassum with the bassoon trio TriOmph.

She gained experience in playing with an orchestra as a Substitut of the Wiener Symphoniker, at the RSO Vienna, Camerate Salzburg, Tonhalle Orchester Zürich, Münchner Kammerorchester and the Vienna Kammerphilharmonie.

She received a scholarship at the Yehudi Menuhin foundation Live Music Now and of the Dr. Robert and Lina Thyll-Dürr Foundation. In 2006 she won the fellowship for the exceptionally gifted at the Musikuniversität of Vienna. 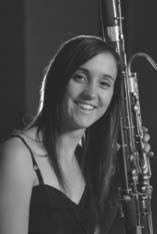