As chamber musician plays regularly with artists such as Imre Rohmann, Vlad Bogdanas, José Luis Estellés and George Pelhivanian, among others. He is founding member of Leonor quartet with which performs throughout Europe and made several recordings. Recently won the prize Ojo Crítico 2011 awarded by National Radio of Spain (RNE). 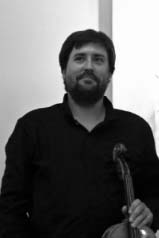