Was born in La Chaux-de-Fonds (Switzerland) and began studying recorder and violin in 1981 in Switzerland.

In 1996 she obtained the diploma of recorder teacher in Lausanne. She continued in Lausanne, specializing in Recorder in the class of Antonio Politano and Elisabeth Mulli where graduated as a recorder teacher with the highest distinction, and, in parallel, studied violin at the Conservatory of La Chaux-de-Fonds.

She was part of the Swiss Competition Jury for Young Artists. She has performed as soloist and with chamber music groups in Switzerland, France, Germany, Italy, Romania and Spain. In 2005 she collaborated with the National Ballet of Spain, recording music for various ballets.

She has taught violin, viola, orchestra and recorder at the Municipal School of Music Guadarrama and Torrijos, as well as violin and viola at the German School and violin, viola and orchestra at the Music School of Boadilla del Monte.

In addition to the educational work she collaborated since 2006 regularly with the Symphonic Orchestra of Madrid and she is also a member of "Ensemble Madrid-Berlin". 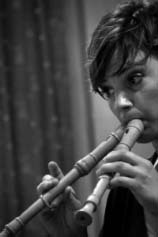