Helena Winkelman is a violinist and composer of Swiss/Dutch origin. She is working internationally as an independent musician since 1998 and her works have been performed in most European Countries, the U.S.A. and Asia.

After finishing her studies as a violinist and having won prizes at national and international violin competitions (among which the international pro musicis award that started her collaboration with Dana Ciocarlie), she started to compose regularly in 1997 during a year of studies in New York.

In 2004 she began her studies in composition at the Music Academy in Basel with Roland Moser (Diploma) and Georg Friedrich Haas (postgraduate studies). During these five years, her fascination for microtones and specialism was combined with her interest in ancient contrapuntal techniques. The music and teachings of Gyorgy Kurtag were of great importance for her development as was the playing and teaching of Swiss percussionist and improvisator Pierre Favre to whom she owes not only much of her musical thinking but also the Jazz influence that is clearly audible in her music.

Her inclinations towards literature (Dante, Ungaretti, Mandelstam, Hohler, Spregelburd, Rumi) and philosophy (myths, ZEN) are vital forces for her creative work. Very often she uses poetry as a source of inspiration - even for instrumental works without lyrics. The vast realm of her activities consists not only of the creation of works from solopieces to orchestral compositons but also includes Improvisation, chamber music and folk music in its original form. This is one of the reasons, why she often uses traditional instruments like the "Hackbrett" and the alphorn in her compositions.

In 2010 her one act Operas Extravagancia and Satanica on texts by Rafael Spregelburd were performed under the title ENVIDIA by the Ensemble Phoenix, Basle, at the Teatro Colon in Buenos Aires. She received commissions from the Sinfonietta Basel, the Harvard Musical Association, Boston, IMS Prussia Cove/Berwin, London, Musikfabrik Cologne, Festival des Forets, Campiegne; Pro Musicis, Paris; IGNM Basel; the chamber orchestra Basel, the Zeitkunst Festival Berlin and many Swiss chamber ensembles and soloists. She is a regular guest at the festival IMS Prussia Cove in England and for five years she was a member of the Lucerne Festival Orchestra under the direction of Claudio Abbado.

As a soloist with a repertoire of more than 240 works and as the artistic leader of the chamber group Camerata Variabile Basel she is strongly commited to the promotion of new music. She plays a violin made by F. Rugger from 1687, a gift of her  grandfather, and lives in Basel, Switzerland. 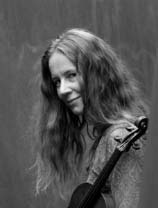